Love at the bus stop!! 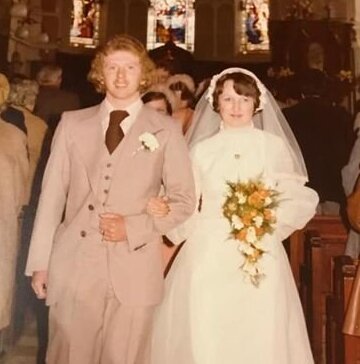 Our lovely Gill Perry (Gill’s Fish) went on a night out when she was 17 with her best friend, a few drinks later and on the way home they met two boys at the bus stop and arranged to meet them the following week! Gill didn’t go and as it turned out her date, John (who was 16), didn’t turn up either! A few weeks later Gill bumped into John again at a local club in Wolverhampton. After chatting to John they arranged to meet again at the Connaught Hotel, this time they both turned up and this was their first proper date. Fast forward five years to 1977, Gill and John married on a snowy Easter Monday at St Thomas’ Church in Wednesfield. Gill remembers the day well ‘it was so pretty with the snow on the ground and the daffodils peeking through the ground’. They had to arrange the wedding for a Bank Holiday as both parents had shops and it was the only time they could get off. Both sets of parents were absolutely delighted they were getting married, so much so that John’s parents took great joy in telling everyone when the wedding was, only to be burgled whilst the wedding was happening. In the early years of their marriage Gill was a hairdresser and John a printer which he hated! John was 3rd generation fishmonger and after his father took retirement through ill health Gill and John took over the business and have been working together for the last 35 years. Gill says ‘we have always got on, we never clash. We have grown the business and each of us have our own roles and just get on with it. We really enjoy working together’. Gill is an avid reader, happy to read anything! John enjoys his music and recently got back into playing his guitar, having played in a band years ago. ‘It is important that we have different interests as we work together all day’ Gill commented. They love taking skiing holidays together and would prefer this to a hot holiday. They also enjoy long walks with their dog Fred, both were brought up with dogs in the family and throughout their time together have had a number of dogs themselves that have lived to good ages. I asked Gill what advice she would give to those embarking on a relationship or already in a relationship and her wise words were – ‘Never go to bed on an argument. My Dad always said that I couldn’t run home, I had to talk through any problems with John and be a team. You have to work at it’.